How to Implement Databricks Data Masking Across Platforms

How to Anonymize Sensitive Data with Databricks Access Control

How to Migrate from Apache Ranger on Databricks

How to Migrate from Sentry on Cloudera to Databricks

As part of Immuta’s Distributed Systems Product team, which builds Immuta’s native Databricks integration, I’d like to share how Immuta can be leveraged to implement dynamic Databricks row-level security and cell-level security.

Implementing row- and cell-level security by hand can be a pain, whether that means maintaining an ETL pipeline to transform raw data into “clean” data that is viewable by analysts, or maintaining a system of GRANTs on views implementing the policies for an organization. This also does not factor in how the user base and policies change over time, meaning that the affected pipelines and GRANTs must always be manually kept up-to-date.

This article walks through how to use Immuta’s data access control capabilities to implement dynamic Databricks row-level security and cell-level security for data analytics and engineering teams.

In this example, we will be exploring a sample data set called medical_records, which contains several forms of PHI. We will explore how data in the data set can be masked (column-level controls), as well as completely redacted (row-level controls).

We will then update the policies to allow access to sensitive data under specific conditions related to a user’s attributes in Immuta, as well as their purpose for accessing the data. This will enable us to expose data at the cell-level for users who need it, without exposing the entire data set.

After configuring the Immuta artifacts in Databricks, click the data sources icon on the left hand side of the Immuta console and click + New Data Source. Select Databricks as the storage technology to create a new Databricks connection. Enter connection information and specify the [medical_records] table. For the purposes of this blog, a single table is being selected to create a data source, but Immuta supports importing an entire database to bulk-create Immuta data sources.

Once the table has been selected, specify a name for the data source in Immuta and press “Create.”

In Immuta’s policy builder, the row-level policy can be represented in plain English. This policy will use attributes from user accounts to restrict data returned based on the comparison between those user attributes and the city and state columns from the data source. We will also make a special exception for the Billing Job Function to only filter on state. 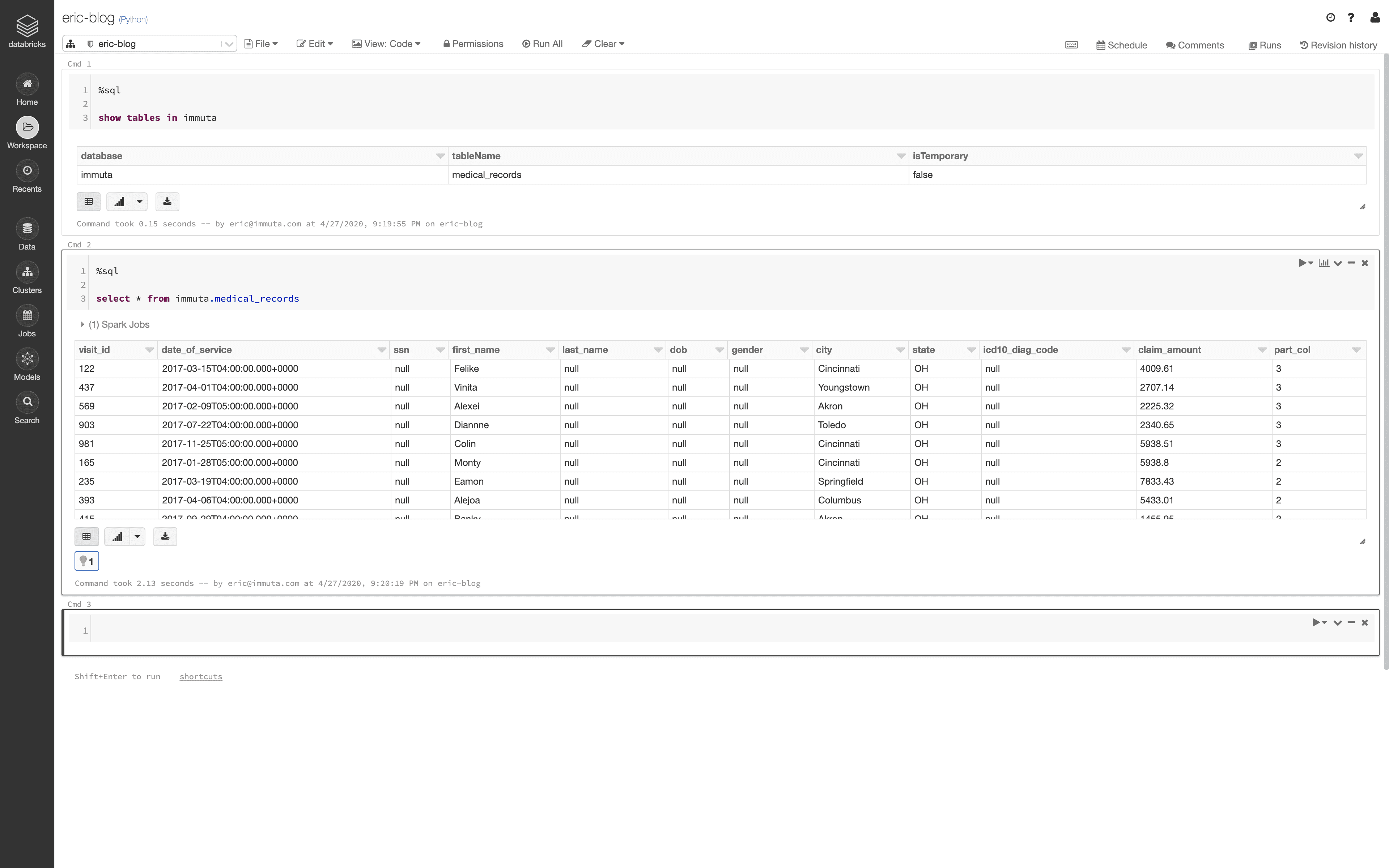 Once accepted, the user can set their Current Project to Fraud Prevention in the Project selector on the upper right hand side of the screen. When their project has been set, they are acting under the Fraud Prevention purpose and can see the following result set in Databricks:

In Immuta, this policy can be implemented by adding a condition to the existing dynamic data masking policy. This solution was developed by our expert teams of software engineers (including my team), legal engineers (legal nerds), and statisticians (math geeks) in order to streamline data access control and security for Databricks users. In addition to dynamic data masking, row-level security, and column-level security, Immuta automates a number of other advanced policies to comply with the regulatory and compliance needs of any organization.

As mentioned previously, Databricks row-level security, column-level security, and cell-level access controls can be achieved with static data and maintained using a combination of ETL pipelines and metadata management. In the ever-changing landscape of regulation and compliance, it is important for organizations to be able to react rapidly and cost-effectively, which is why Immuta’s dynamic policy building and enforcement was created. If you find value in this approach, you can request a demo.